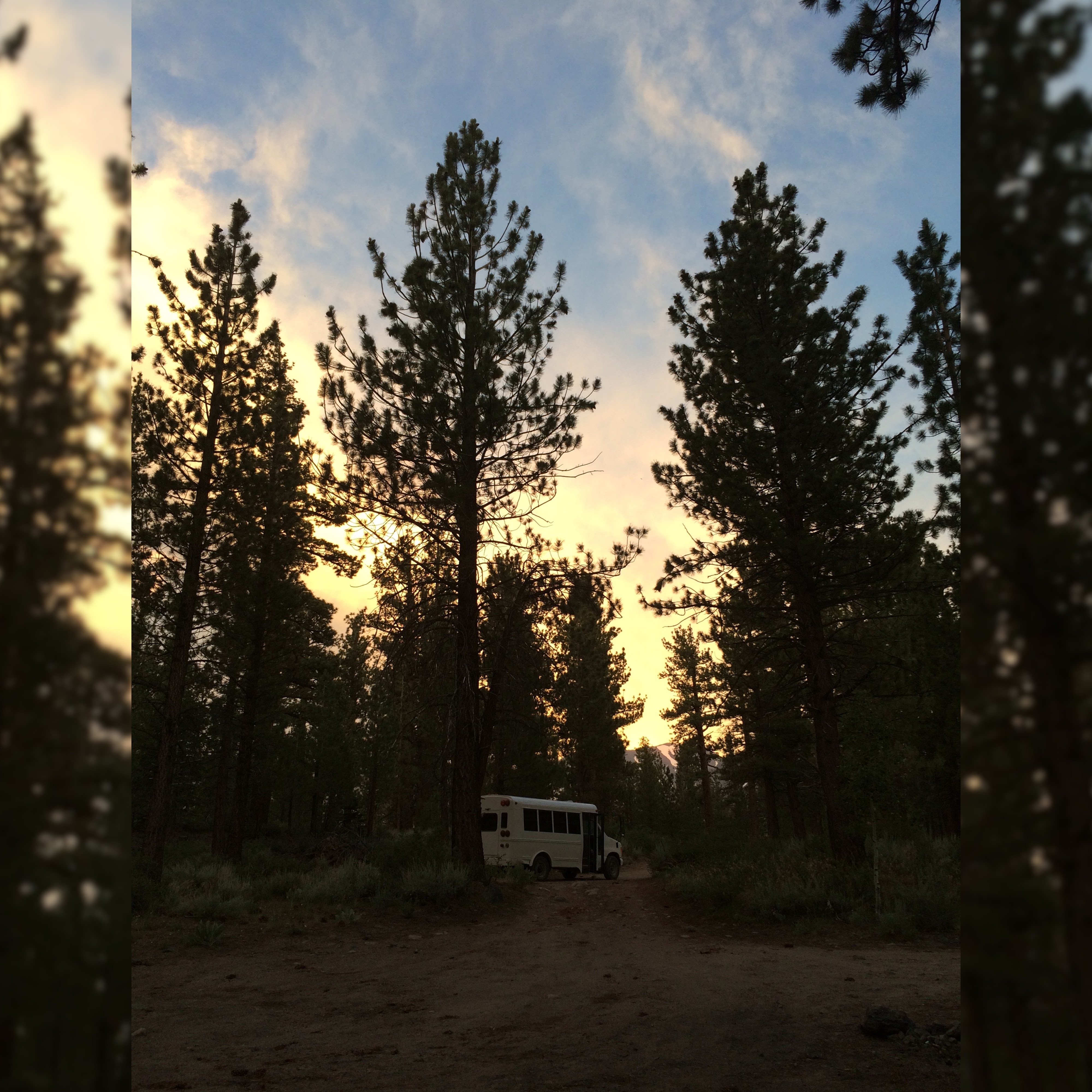 When I first got the Bus I was going through a bit of no sex phase. The previous few years had been really hard and I was still going through phases of recovery and growth. I had been intentionally celibate on and off. But eventually I started tentatively swiping on Bumble again.

I found a guy who said he wanted to practice massage for his certification exam in a few days, and was willing to give a free massage. I was a little wary, but it seemed nice and innocent enough, even though we had matched based off looks! I definitely harbor some massage fantasies, where the masseuses slowly and tentatively starts crossing that professional line, but as I was off sex at the time, I wasn’t really hoping it would go anywhere. When he told me it would be happening at the massage place he was training at I was happy it would just be what he said, him practicing his massage skills.

We met outside the shop and I was pretty nervous. He was cute with big eyes and curly hair. I didn’t know if this was meant to be a date vibe or professional or what was going on with the attraction. But he explained the set up in the shop and how he had been training while he lead me into the room. He left me to get undressed and the innocent nature of the exchange to come was set in stone for me. I did, however, got fully naked and lay under the towel before he came back in.

I love being massaged. Rub me, stroke me, tickle me, run your hands over my skin, pamper me, i love it all. I am after all, a Leo. He started up around my shoulders and I slowly relaxed under his hands as he worked on my back. He occasionally asked for feedback and I let him know I was enjoying it. After what felt like a full, long back massage, he asked if he could massage my legs too. Of course I wasn’t about to say no. The warmth of his hands and the oil on my skin felt so good. He started on my feet and calves and slowly started massaging further up my legs. The further and futher up my thighs. Almost too high. His fingertips getting closer and closer to my inner thighs. I wanted to spread my legs more to give him better access, but I didn’t want it to seem like i was welcoming more action. I was getting very, very wet though. Like I said, those boundary crossing subtle movements are the shit for me and exactly what I fantasise about.

He asked if he could massage my ass as it feels really nice, which I definitely know, and with my pussy dripping and my soul willing him to go further I said “yes please”. He got into some of the good spots and was back to the right (wrong for me) side of the professional line, asking if it was ok, checking he wasn’t going too far. Of course he wasn’t going too far and I told him it was all good. Then the fingertips started roaming again. Massaging my inner thighs and up to my cheeks. He must have been able to feel the heat and wetness of my pussy. But he kept his fingers just barely grazing inappropriate places. He worked this area for a really good amount of time, being very through. I was aching for more, but he started working his way up my back again to finish the massage. And then he was done. He told me to take my time and get dressed and as he left I immediately started thinking maybe I had got it wrong. Maybe all those little lines were crossed accidentally, he was actually just practising massage, and I had gotten carried away, that my wet heat gave away how I had been the one crossing that line. He came back in and the tension was intense. It hadn’t been just me. So after a little chat we arranged to meet up later that night as he had to finish up there.

I had been parking the bus down by a creek off a highway and he managed to find me pretty easy. But I don’t know what we did that night, and I don’t remember that very first bus sex unfortunately. But I’m sure we worked out all that tension that had been built up earlier.

Considering I said this was about my first bus sex, it has been decidedly not about that! I do however remember another time with him in the bus, in a different spot by the creek. We were making out and starting to enjoy ourselves, when at about midnight, a couple of cars turned up at the next spot over and a few youths spilled out. Its a small town so I imagine the locals have certain spots they party at. 335 wanted to go see what they were getting in to, but at the time I was still feeling very antisocial in life so we stayed in bus. It was summer and we had the back door and windows open and lights on inside. Only fairy lights, but you could definitely see in the bus. After spying on the kids for a while we got back to each other and getting naked. We were parked so they couldn’t see in the windows and happily got naked and started fucking while the youths built a fire about 100 meters away. While I was on top of 335 with my ass facing the open door, I could hear people outside walking around and we realised they were collecting more wood. This wood collection, and Id imagine some curiosity, lead them to the back of the bus. They weren’t too close though and we were kind of enjoying the idea of what they could and couldn’t see, so we carried on. A few minutes later we realised they weren’t collecting wood any more. Two girls and a guy were stood about 50 meters away in the pitch dark getting a great view of my ass and my pussy stretched around his cock.

We looked at each other to see how we were reacting to putting on a bit of a show. The fact that there were two girls watching instead of it just being boys perving, really encouraged us to keep going. I thought it was so hot that they wanted to watch and so did he, to see me on top taking this dick, not being shocked and putting aside any judgement for their enjoyment. I stopped thinking about them and carried on getting into the sex I was getting to have with the fresh air on my skin, knowing that me enjoying it would be much more fun to watch than them thinking I knew they were watching and I was putting on a show. We pretended like we didn’t know they were there and just carried on. If they wanted to watch that was up to them. They had wandered over to our side of the spot and they had chosen to stay standing there.They clearly weren’t offended. It was especially fun being on top while they watched, so they could tell I was in charge. And on top is where I stayed, fucking like no one was watching, maybe being a bit quieter than usual, riding him, until he came. By the time we had finished the voyeurs had moved off.

We met up a few times after that. I stayed in his RV, we went to the lake, we had more Bus sex in different spots. Then it was time for me to move on, head north for the solar eclipse and say goodbye to my first Bus fuck buddy. Now I think about it, I guess that started off my much busier, naughtier times in the Bus that were to cum!(sic)