i had gone for a piss at a party at me mates house and this man, 82, id had a 3 some with a couple of weeks before followed me in to the toilet. as i went to sit on the toilet he got his knob out and shoved my head down to suck it. i wasnt really up for it with him as he was a bit old an fat, the dady of the group, but i was too fucked to care so i went along with it. with the distraction i hadnt started to piss yet, but i really needed too. while i was sucking his cock, he bent down and started rubbing my clit an slipping his fingers in my pussy. he stopped for a minute and stood back and i took the opportunity to take a piss. however as soon as i started, he stepped back up and started playing with me again. i didnt really expect this so i tried to stop, but he encouraged me to carry on. pissing with three fingers up your pussy isnt easy, but it certainly felt good. when i had finished he stood me up, bent me over the sink and fucked me from behind. the filthy old man got out his phone and filmed us fucking close up and in the mirror and he came all over my ass. he told me he would delete the video but a few weeks later he told me he wanks over it most nights. so its still out there. and so is my desire to piss on some more men. 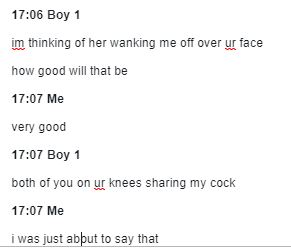